Long ago, I was taught that a proper handshake involved several things. They're pretty simple really: 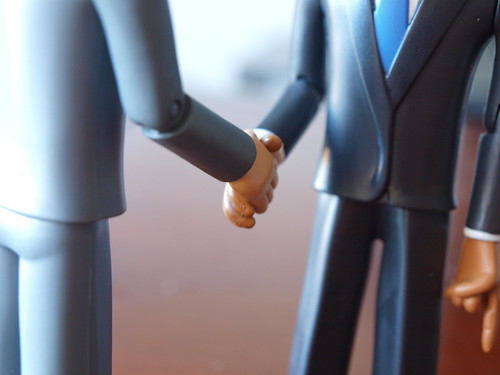 If you were to search Google about how to give a proper handshake then you would find articles and videos that mostly tell you the same things I learned. A handshake is one of the first impressions you get when meeting someone. With the way I was taught, there is an element of sizing up the individual with whom you're shaking hands; there's a certain machismo involved. If the grip is too weak or they avoid eye contact it could be construed as a sign of weakness and, therefore, leaves a bad impression. CareerBuilder cites a University of Alabama study to this effect:

[The] study found that consistent with the etiquette and business literature, there is a substantial relationship between the features that characterize a firm handshake (strength, vigor, duration, eye contact and completeness of grip) and a favorable first impression.

However, a few days ago I had my ingrained notion of what a handshake should be challenged by an unassuming individual. He didn't challenge it directly, he simply shook my hand in a way that was entirely foreign to me. His handshake had the following characteristics:

Normally, I might have a negative reaction to this type of handshake, but this time I didn't. Why? The handshake was sincere, absolutely and utterly sincere, and conveyed quiet confidence. In fact, it was probably the most sincere handshake I've ever received, yet it goes against most of the things I've been taught about a proper handshake.

It made me wonder why we've trained ourselves to look for weakness and/or dominate the other person during first impressions instead of looking for sincerity, authenticity, trustworthiness and good will. Is it some sort of evolutionary thing; a throwback to the days when our ancestors continually fought for dominance of each other? I'm not sure, but I feel like the handshake has become an insincere, mechanical response to a common interaction. In essence, it's lost it's meaning.

What do you think?